As a result of an in-duct gas turbine back fire on the existing Heidrun platform based in the North Sea, Mjørud AS were commissioned by Statoil to remove a damaged flap diverter from the platform and repair it at their factory in Oslo.  After inspection it was determined that the flap diverter was beyond practical repair and a replacement solution was to be sourced.  The diverter controlled the gas turbine exhaust gas either to the WHRU – waste heat recovery unit (to recover the heat for use) or to the stack.
How DTL and Mjørud AS worked together to provide a Solution

Mjørud approached DTL for their expertise in the field of industrial dampers after working on a number of other successful projects together.  After discussions with DTL and Mjørud, Statoil ordered a replacement casing fitted with WHRU and stack multi-louvre dampers instead of another flap.  The following benefits being identified :-

The casing was reverse-engineered from the existing damper, with modifications to accommodate multi-louvre dampers in lieu of a single flap.  DTL designed and supplied a complete stainless steel solution to include, blades, shafts, bearings and drive train (levers, linkages, rod ends).  Mjørud designed and manufactured the replacement damper casing.

The casing and blades/drive train were manufactured in Norway and the UK respectively, then assembled and client witnessed testing was performed in Mjørud’s factory, all under the supervision of a DTL service engineer and Product Support Manager.
The damper was successfully built and tested at Mjørud’s factory as planned, prior to being transported back to the platform and retrofitted by Mjørud.T

See the Multilouvre damper in action by clicking here to watch the video on YouTube. 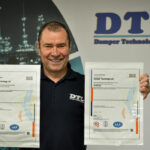 A marathon day for Sally 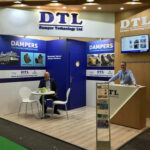 We use cookies on our website to give you the most relevant experience by remembering your preferences and repeat visits. By clicking “Accept”, you consent to the use of ALL the cookies.
Read MoreCookie settingsACCEPT
Manage consent

This website uses cookies to improve your experience while you navigate through the website. Out of these, the cookies that are categorized as necessary are stored on your browser as they are essential for the working of basic functionalities of the website. We also use third-party cookies that help us analyze and understand how you use this website. These cookies will be stored in your browser only with your consent. You also have the option to opt-out of these cookies. But opting out of some of these cookies may affect your browsing experience.
Necessary Always Enabled

Any cookies that may not be particularly necessary for the website to function and is used specifically to collect user personal data via analytics, ads, other embedded contents are termed as non-necessary cookies. It is mandatory to procure user consent prior to running these cookies on your website.